Staffing-and-Recruiting-Essentials.com
Identifying and hiring the best candidates in the world

The interview assessment can make the decision easier or more difficult. When done correctly, it simplifies the process.

If the process is complicated it runs the risk of making selections more difficult and adds confusion.  So how do you simplify?

There are two strategies that are used to simplify the process of eliminating candidates, grading and ranking. My preference is ranking but more on that in a minute.

In the grading system, each candidate is graded on the key criteria such as skills, personality fit, management style, etc. It is important to grade each candidate immediately after the interview. If there are multiple interviews, the freshest impression will always be the last.

After each candidate is graded, by each member of the interview panel, a gross score can be created. Sometimes the criteria are weighted consistent with the require skills for the position. The benefit of the grading system process is that each candidate gets a fresh assessment based on their interview and not in comparison to other candidates. The down side is that the scoring, the criteria and weighting (if required) must be decided up front.

Ranking System and the Interview Assessment 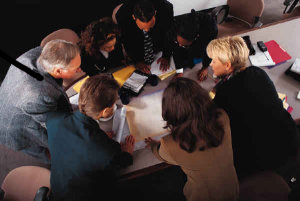 The benefit of this approach is that the candidates are directly compared and if weighting is used, the best candidate will float to the top. Often with scoring systems there can be equal scores given to a candidate. In the ranking system one candidate must be ranked higher than another, even if the differences are subtle.

The biggest downside is that sometimes the last candidate interviewed receives a slight benefit because the information is freshest. This can be overcome with good notes.

Finally my preference for the ranking system is that it forces a decision between candidates. The act of ranking is in itself a decision maker and forces choices to be made. The end result is a clear cut favorite for the ultimate selection.

© Copyright 2008-2012 Staffing-and-Recruiting-Essentials.com Use Is For Informational Purposes Only Always Seek Legal Counsel for Specifics of Your Circumstance